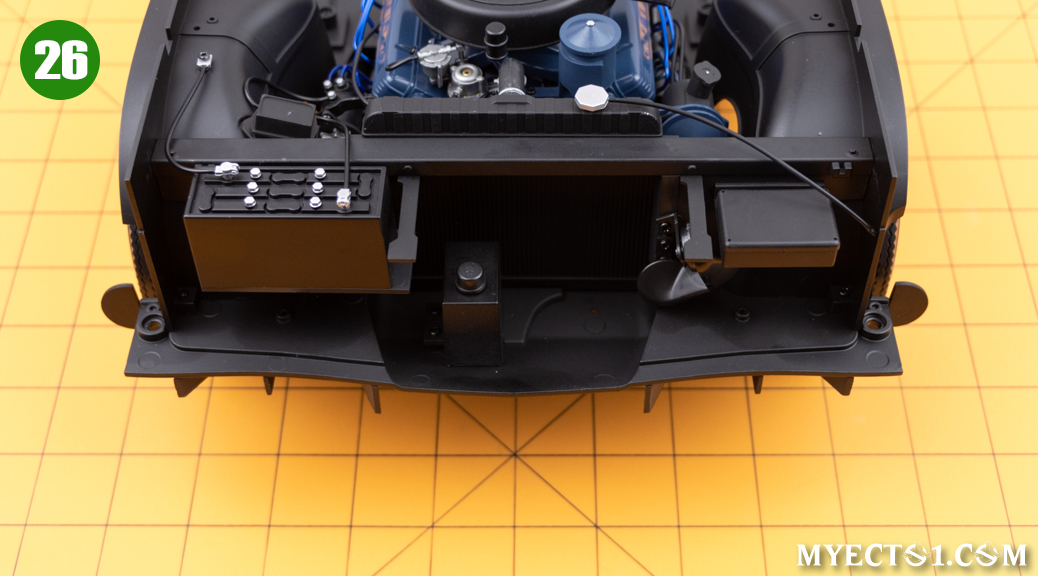 “In this stage, you assemble and fit the control box, battery and oil reservoir. You also fit the grounding for the battery.” Materials: All parts in this stage are plastic. Secure these parts together from below with two (2) DP screws: Retrieve the Radiator Beam assembly from the previous stage. Fit the locating pin on this Control Box assembly through the matching hole in the Engine Left Front Wall next to the horns and align the two screw holes, as shown: Much later in the build, I added the Delco Battery Sleeve mod from Mike Lane. However, if you would like to do the same, this is the best point in the build to install it. I came back here to update this stage with the information: There is a tab on the bottom of the Battery that matches a notch in the Battery Base to align these correctly: Fit the two locating pins of the Battery Base through the small matching holes in the the Engine Left Front Wall, as shown: Secure this Battery assembly to the Engine Left Front Wall with three (3) IP screws, as shown: Secure the Oil Reservoir Cap into place from the inside with one (1) EP screw.

You will need to grip the cap fairly tightly here or it will spin around while you try to tighten the screw: Retrieve your Chassis assembly. Fit the flat side flange of the Oil Reservoir over these two posts on the Front Chassis, as shown, and secure it into place with one (1) DM screw at the rear… There are also two small alignment pins along the bottom of the Radiator assembly that fit into matching holes in the Chassis: Secure this Radiator Beam assembly to the Left Front Fender Liner as shown, with one (1) EM screw: On the other side, secure the Radiator Beam assembly to the Right Front Fender Liner as shown, with one (1) EM screw: Finally, slide the free end of the Cable we attached to the Generator in the last stage to this pin on the Junction Box: Fit the Ground Terminal to this location on the Right Front Fender Liner as shown, and secure with one (1) EP screw.

The Ground Terminal does have a small locating pin on the bottom to align this correctly on the fender liner: Slide the end of a Battery Cable over the smaller pin of each of the Battery Terminals, as shown: I trimmed a little bit off the end of this Battery Cable to fit better: Push the pin of the other Battery Terminal into this hole on top of the Battery, as shown, and attach the free end of this Battery Cable to the remaining pin of the Junction Box.

I trimmed a little bit off the end of this Battery Cable to fit better as well: With this stage complete, we have enclosed most of the engine bay and added a lot of details. I feel it is looking great!