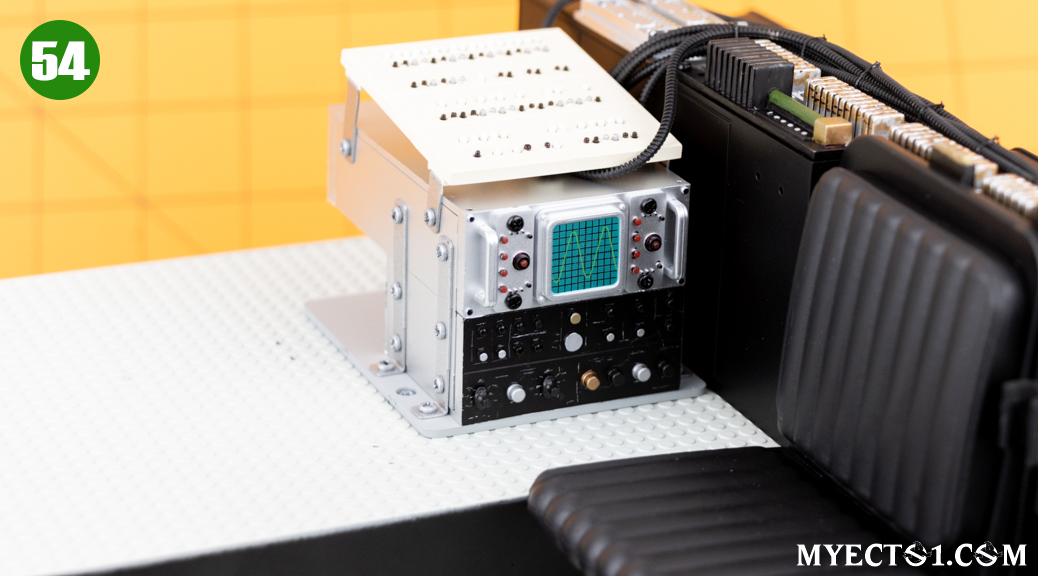 “In this stage, you assemble the BGM-340 guidance system and fit it to the control panel and cargo area floor.”

Materials: The Oscilloscope Support Struts are metal, but the rest of the parts are all plastic.

Before we get started on this stage, I wanted to add some color and details to our BGM-340 Guidance System part. This section of the real Ecto-1 is actually two Lear Siegler Inc. Astronomics Division Model BGM 340s with a random switch panel stuffed vertically in between them:

First, I used my Metallic Silver and Gold Sharpies to give some of the raised details some contrast. Next, I used drops of Tamiya X-27 Clear Red and X-26 Clear Orange acrylic paint on a few of the details to look like rounded unlit lamps. Then, I used the tip of my hobby knife to scratch details into the black surface: 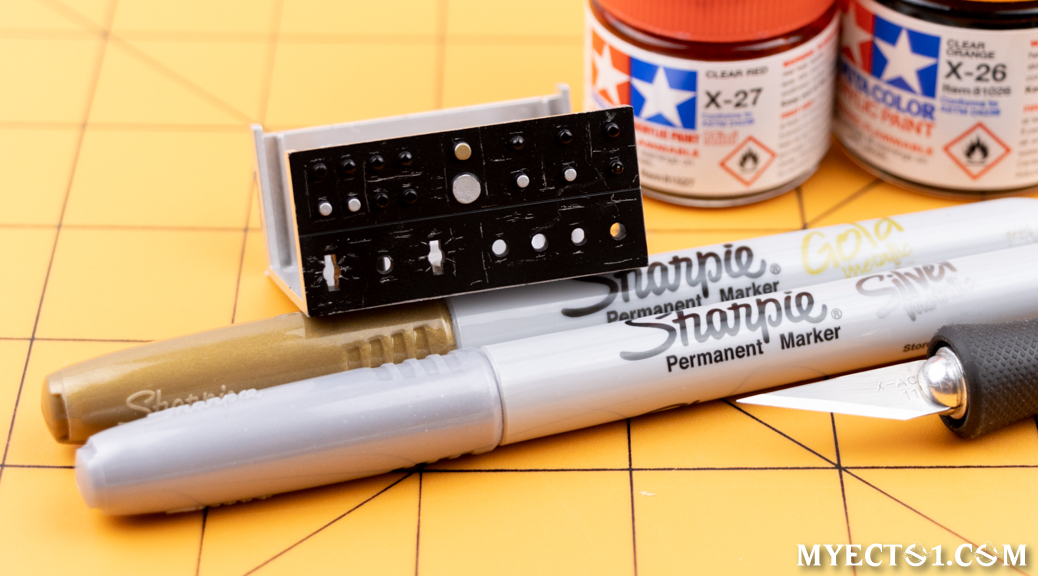 Here is a better shot of the ‘scratch details’. I just wanted to get the feeling of the white surface writing here: 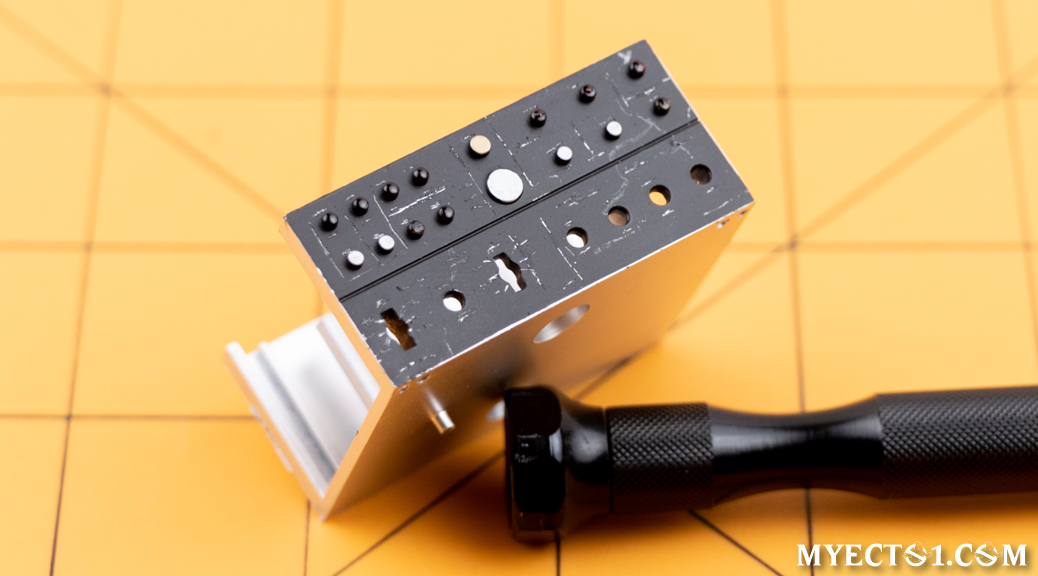 Finally, I used the Sharpies again to ‘paint’ three of the five BGM-340 Guidance System Knob As while they were still on the sprue: 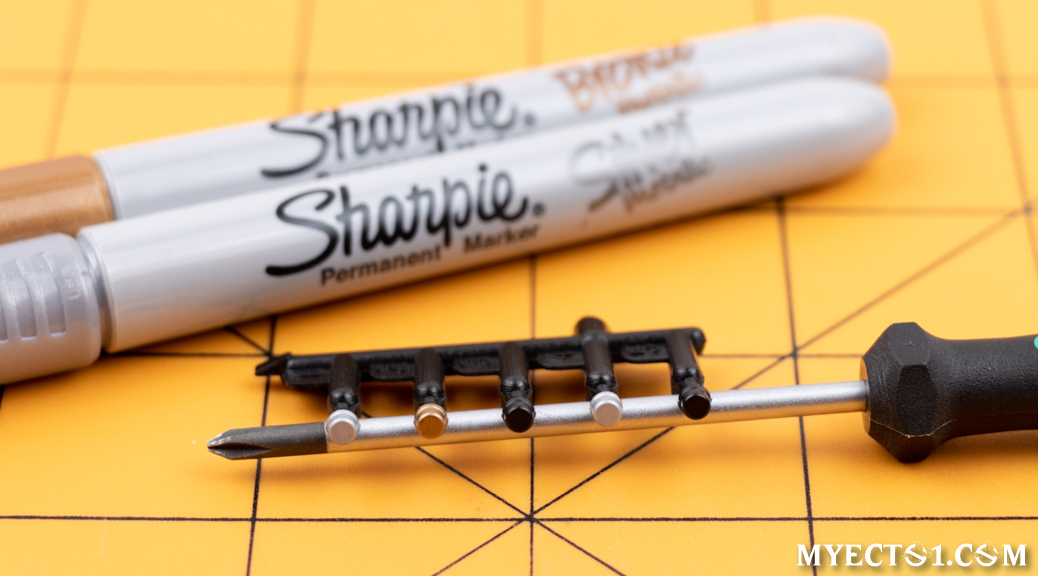 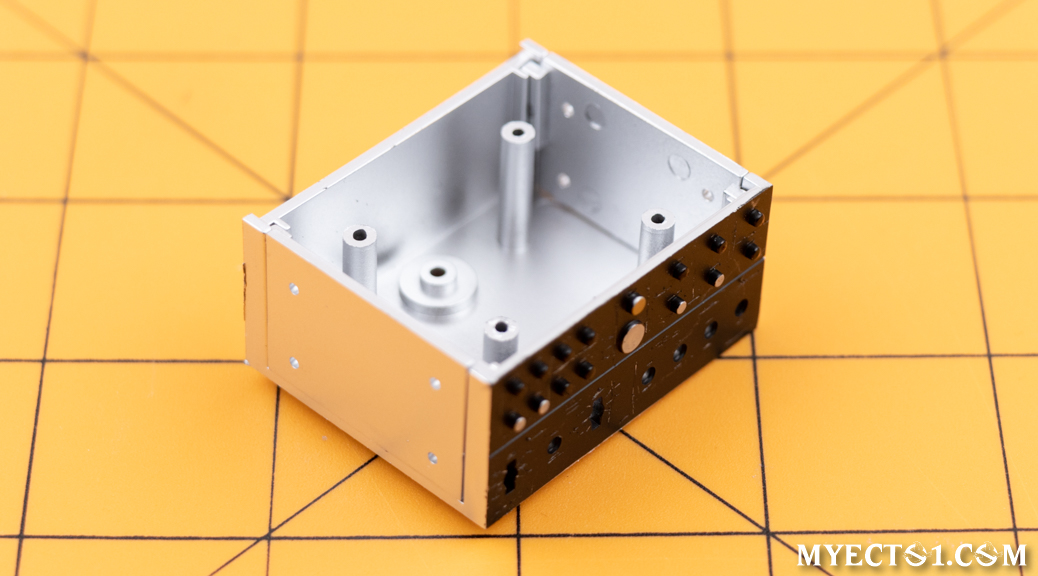 Fit the BGM-340 Top into this assembly, aligning the holes as shown: 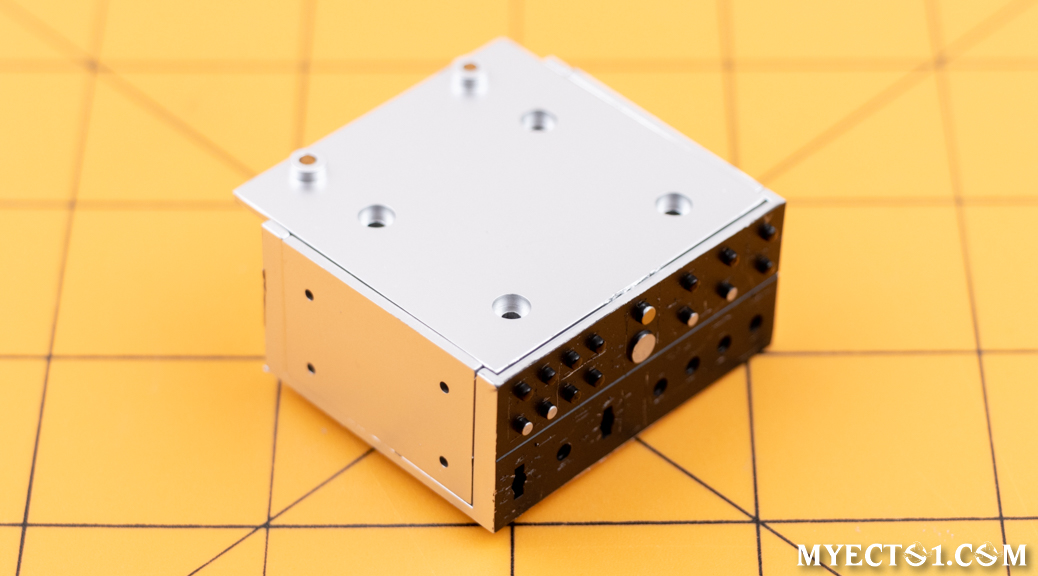 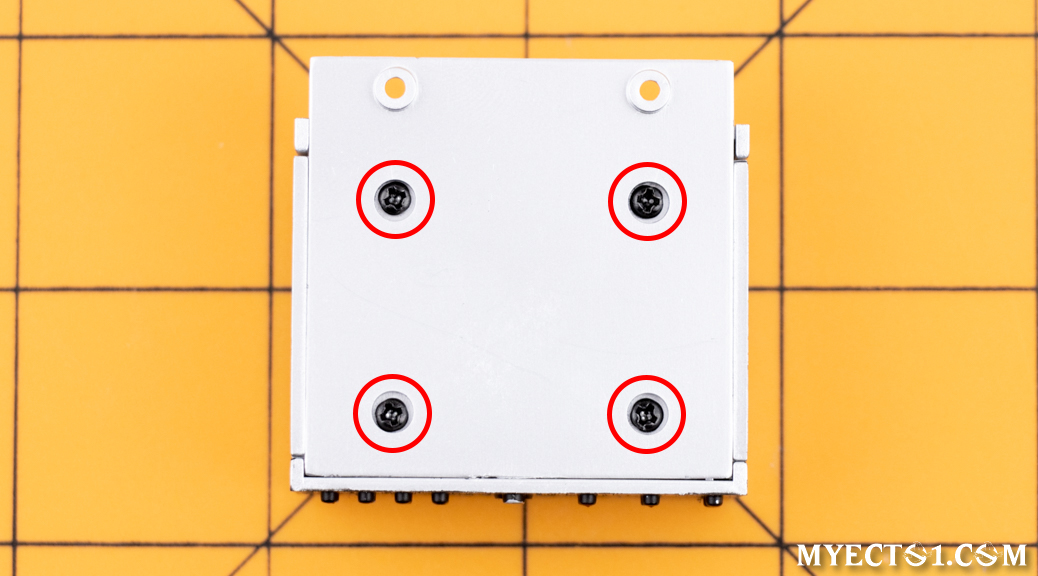 Cut the five BGM-340 Guidance System Knob A off the sprue and press them into the face of the BGM-340 as shown:

Using sprue cutters or a sharp hobby knife to remove the knobs from the sprue is a big help: 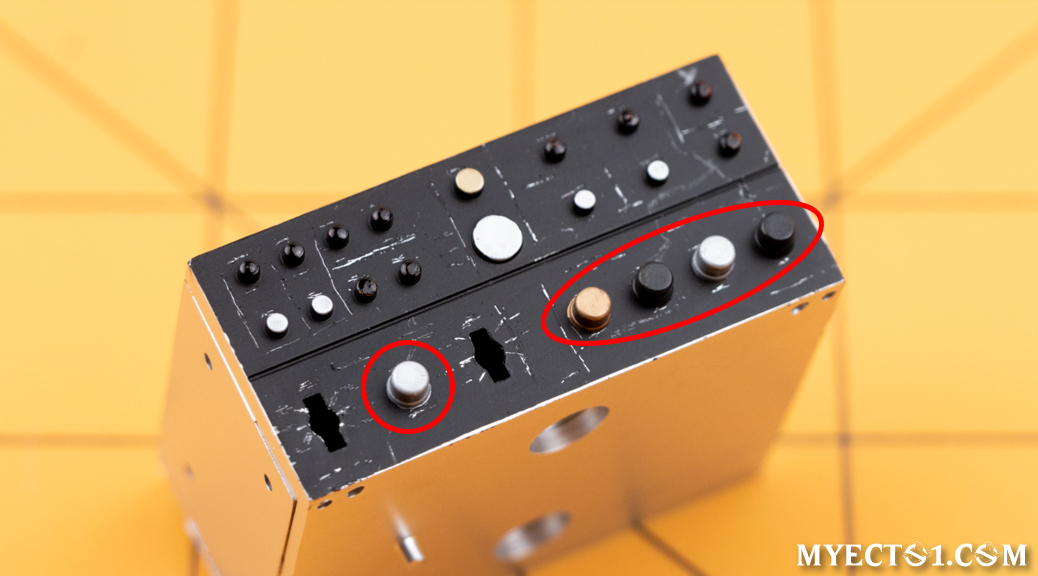 Cut the two BGM-340 Guidance System Knob B off the sprue and press them into the face of the BGM-340 as shown: 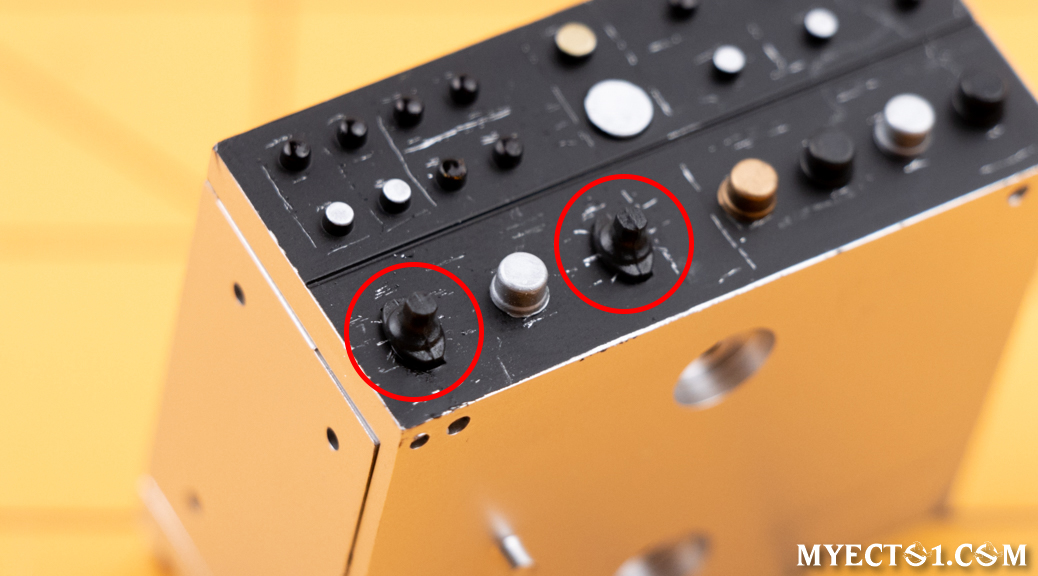 Retrieve your Oscilloscope assembly from the previous stage. Fit this BGM-340 assembly to the bottom of it as shown: 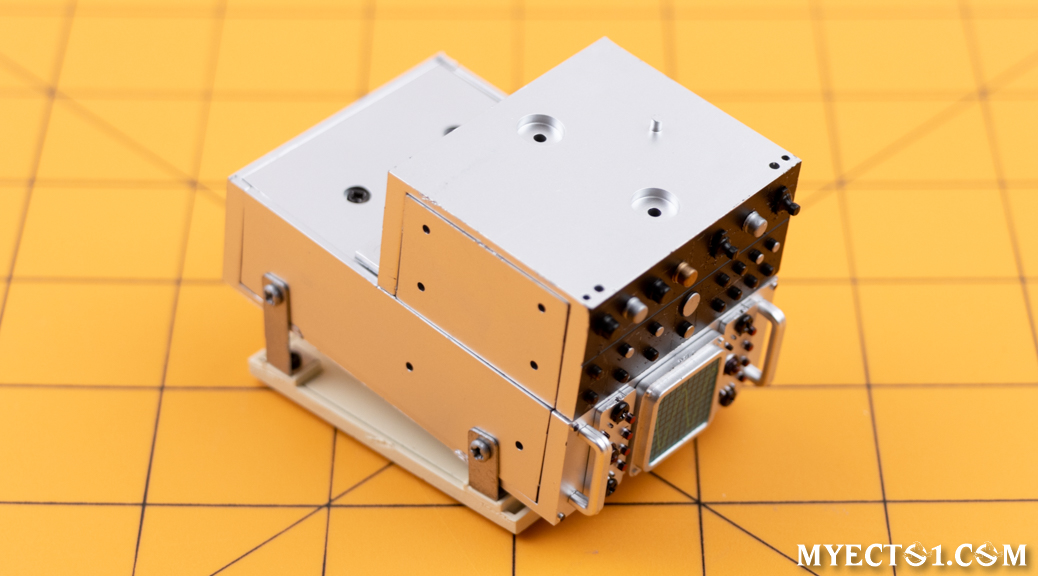 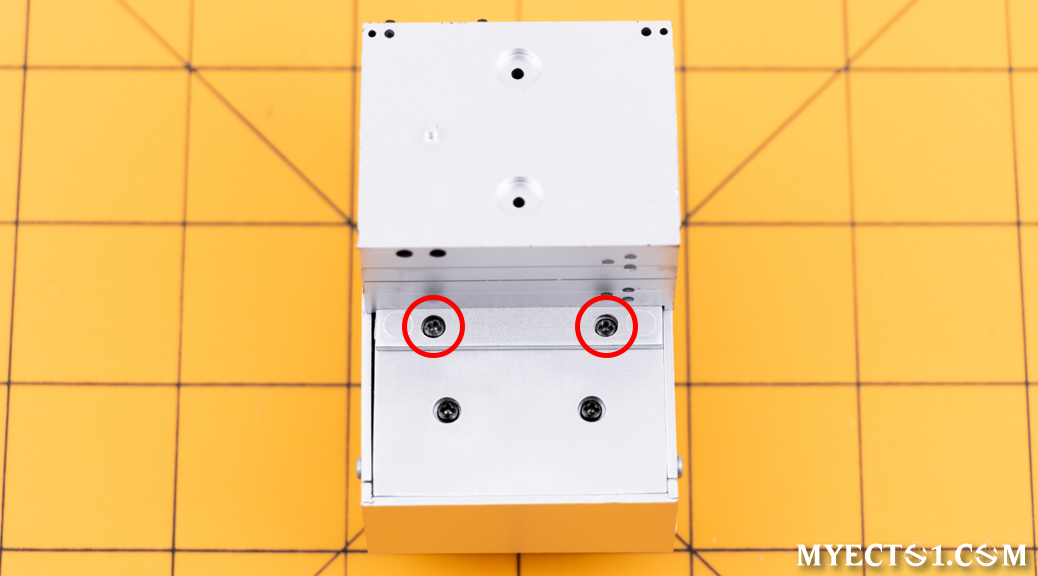 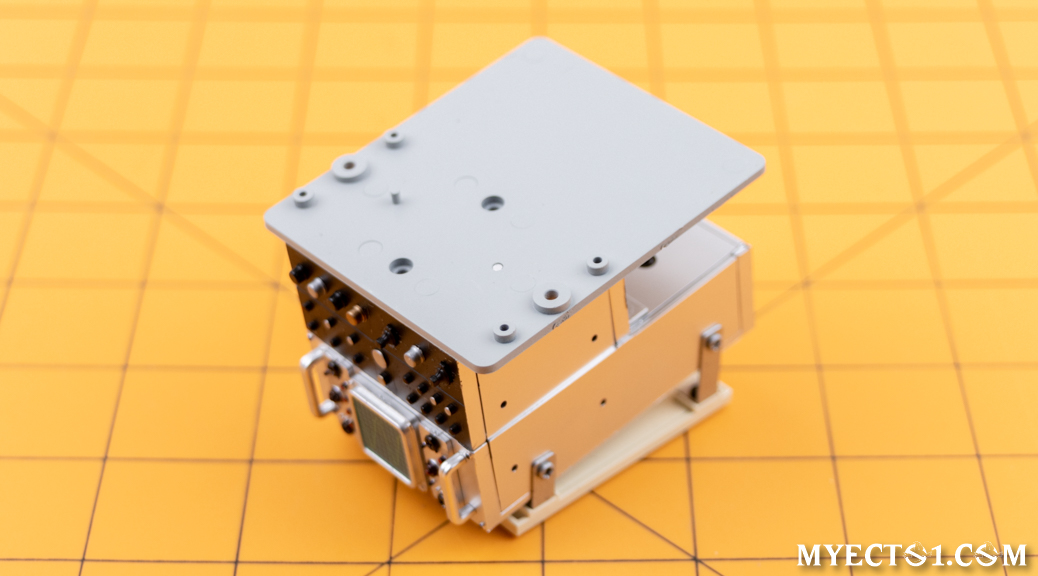 Secure the Base into place with two (2) IP screws: 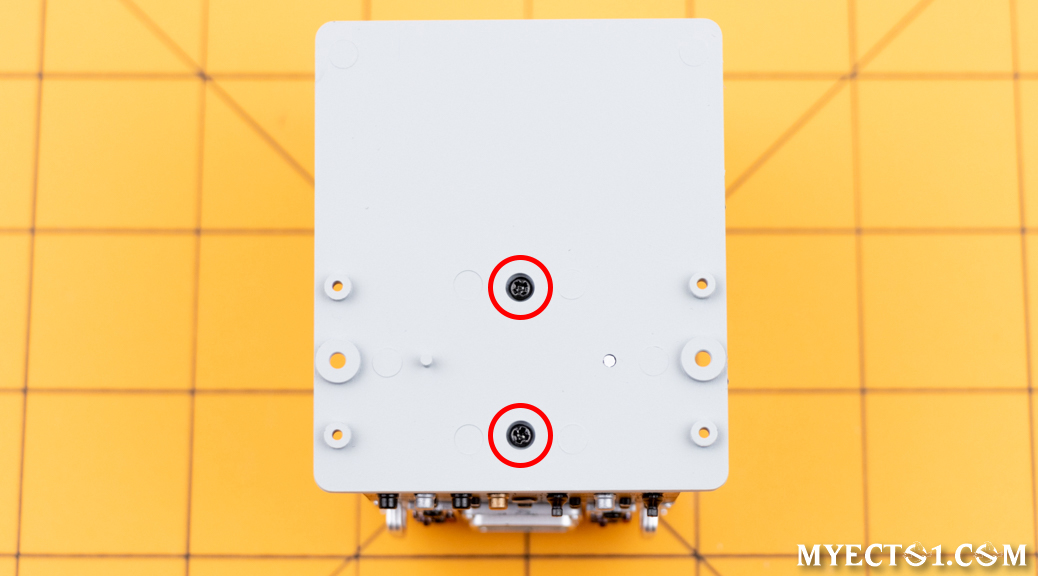 Flip this assembly upright. Then, fit one of the Oscilloscope Support Struts to the side and secure it with four (4) KP screws, as shown.

With this much silver metal to secure, I ‘painted’ these screws with my Metallic Silver Sharpie so they would look better: 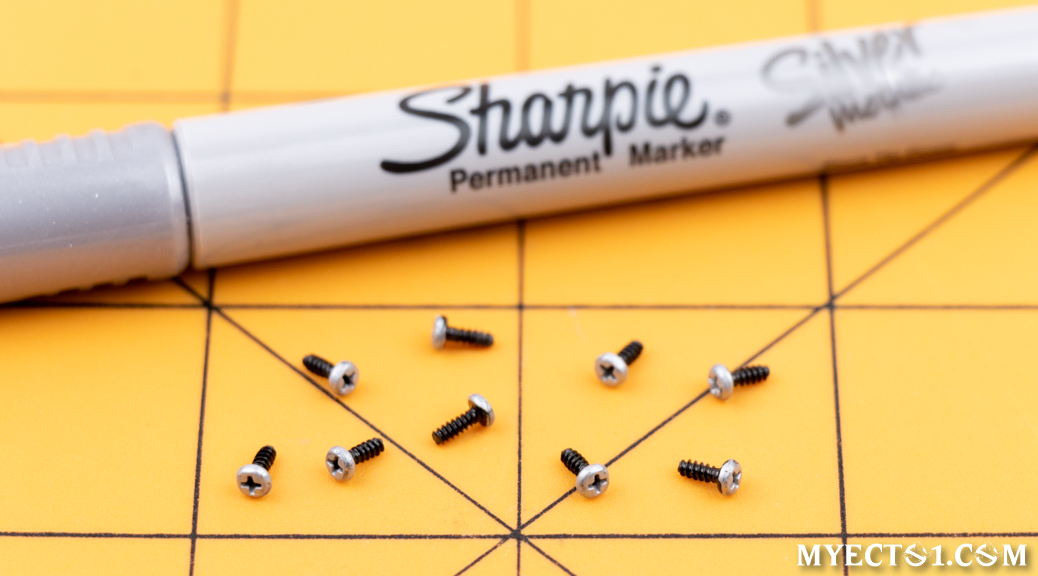 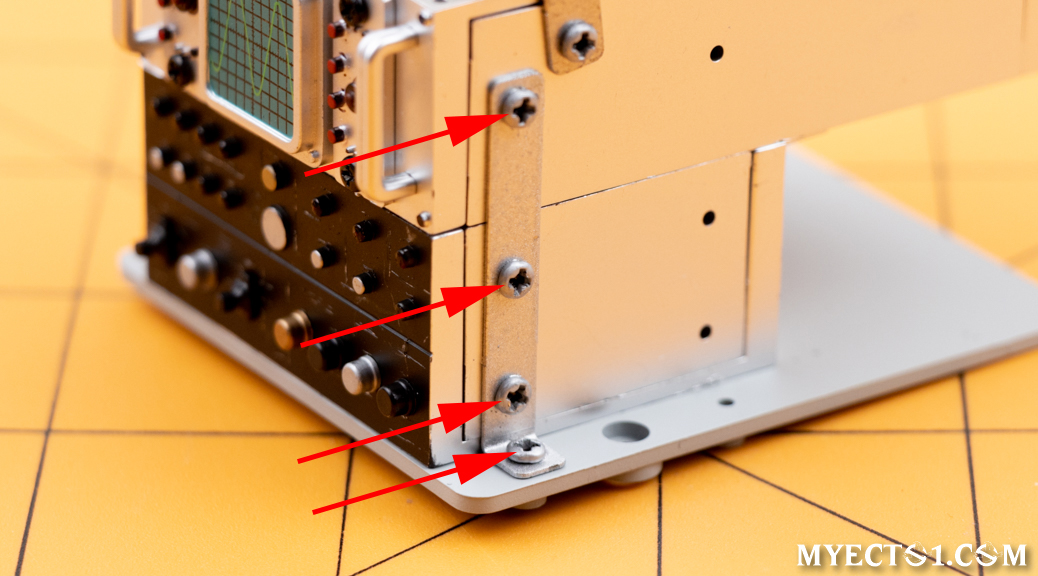 Repeat this step with another Oscilloscope Support Strut and four (4) more KP screws: 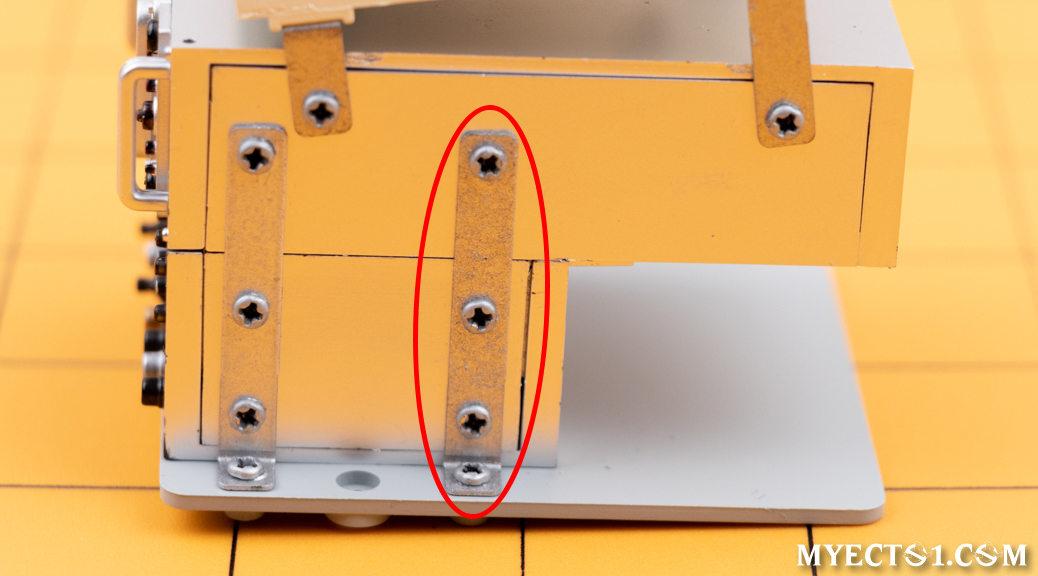 Repeat this two more times on the other side: 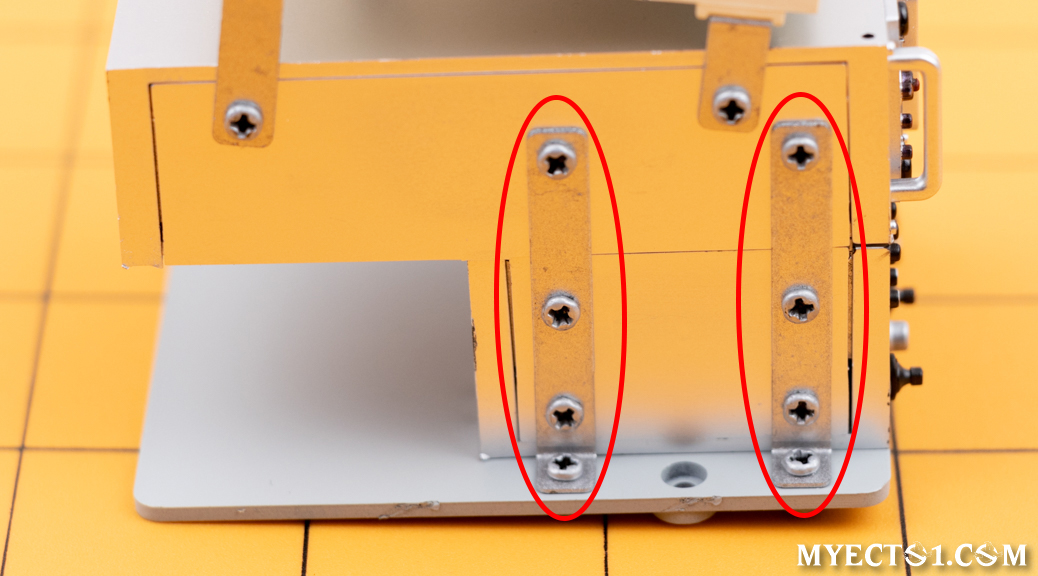 Before we mount this assembly, take note of these holes on the back of the BGM-340. If you installed the Flex Tubes from Stage 51 according to Eaglemoss instructions, you will use the two holes marked with the arrows below: 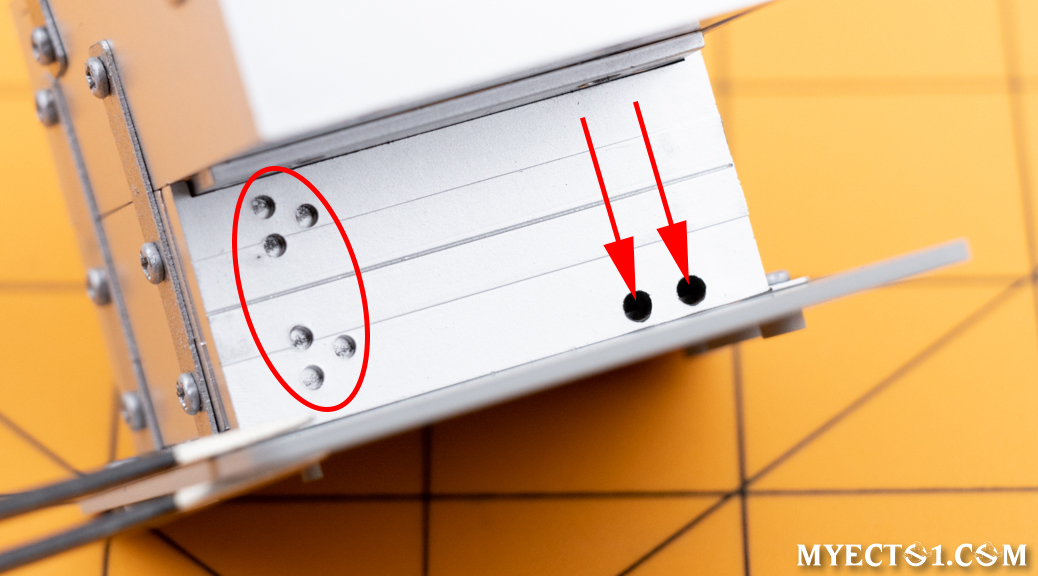 However, if you followed my modded install of the Flex Tubes, we are going to need to open up the six cutouts circled in the picture above. I used the same 0.860″ (Size 44 or 2.18 mm) bit in my Pin Vise Hand Drill: 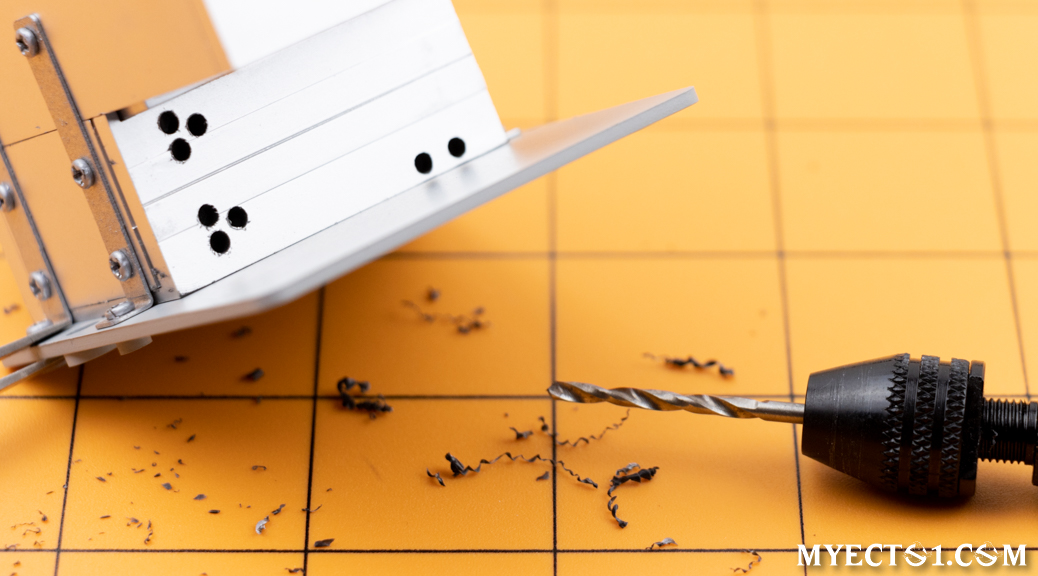 Retrieve your interior Floor assembly from Stage 52. Fit your BGM-340 Base to this location near the front, aligning the two bottom posts into the matching holes as shown: 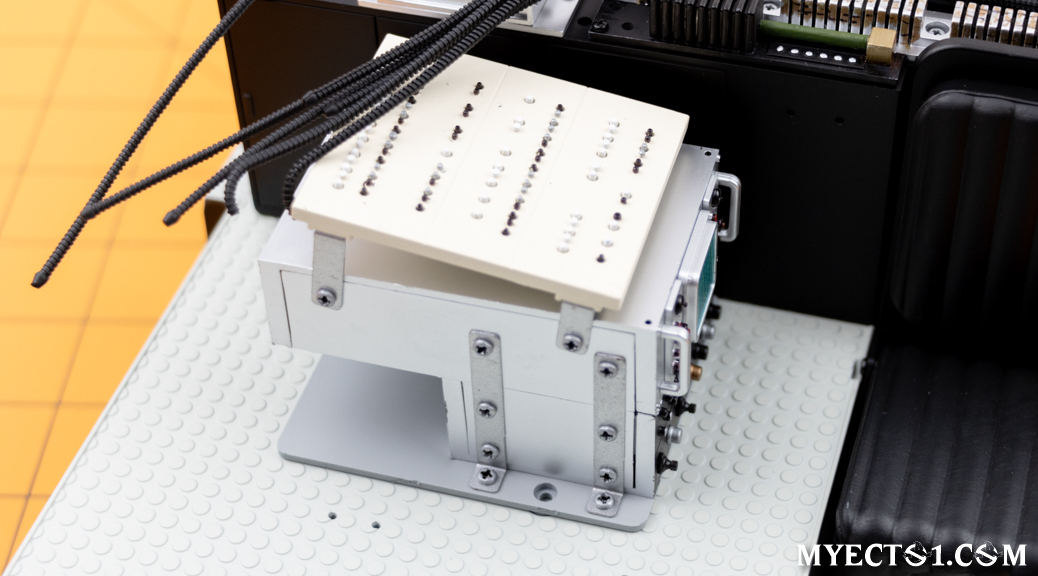 Secure the BGM-340 Base to the Cargo Area Floor with two (2) IP screws: 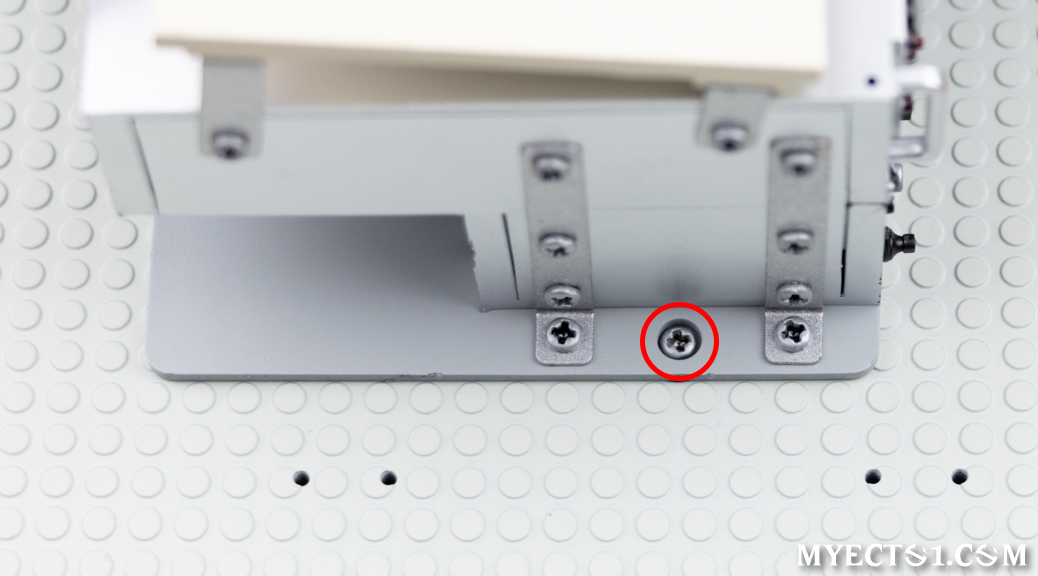 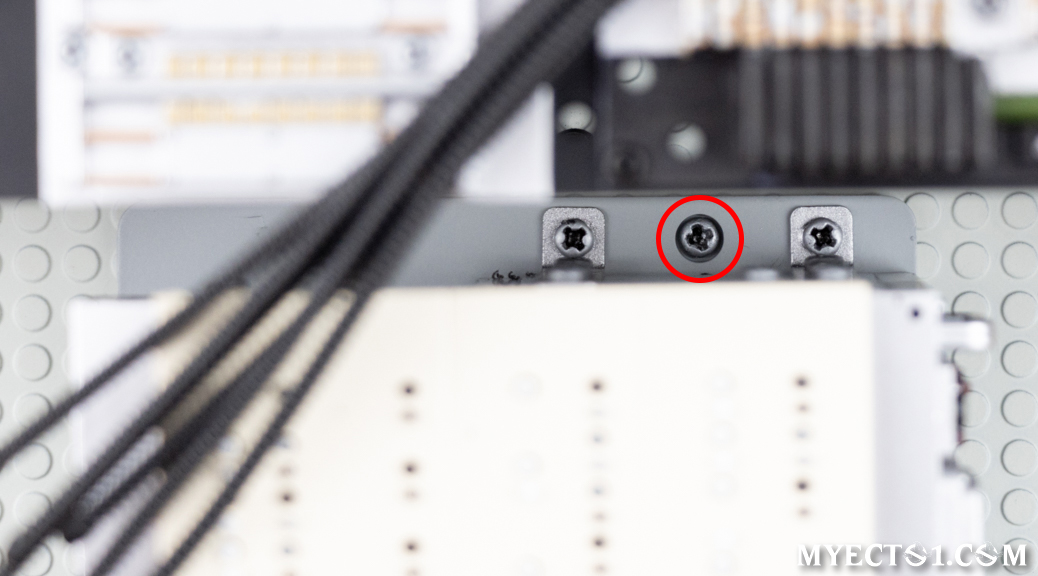 At this point, if you installed the Flex Tubes according to Eaglemoss, you can run them under the Control Panel and down to the two holes in the back of the BGM-340. The printed instructions show this step really well.

However, if you used my custom Flex Tube installation, find the shortest tube and run it under the front of the Control Panel, like this. The end of it caught around the screw under the panel and keeps it in place: 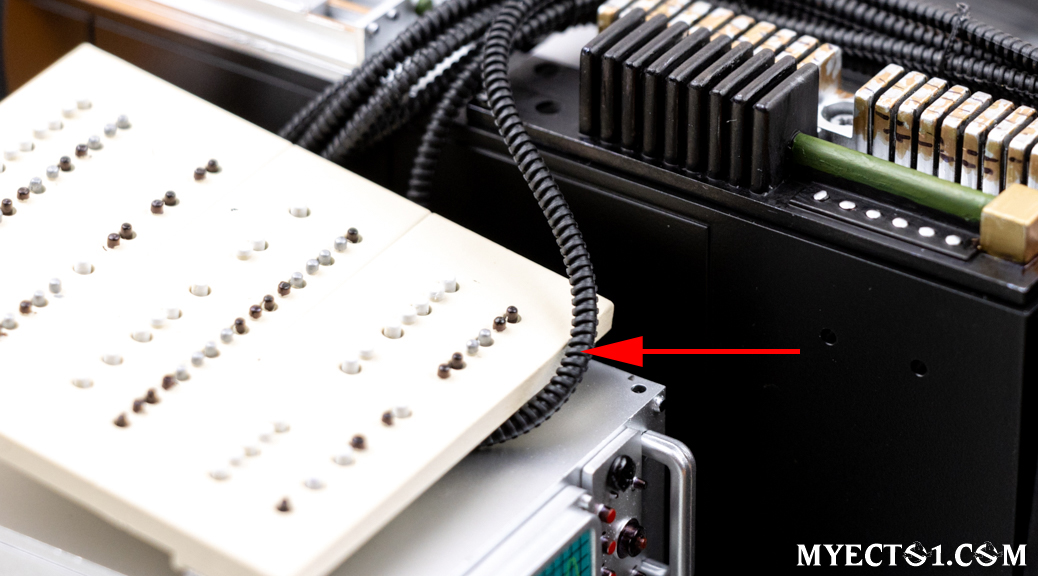 The remaining tubes can run down between the Oscilloscope and the Workstation: 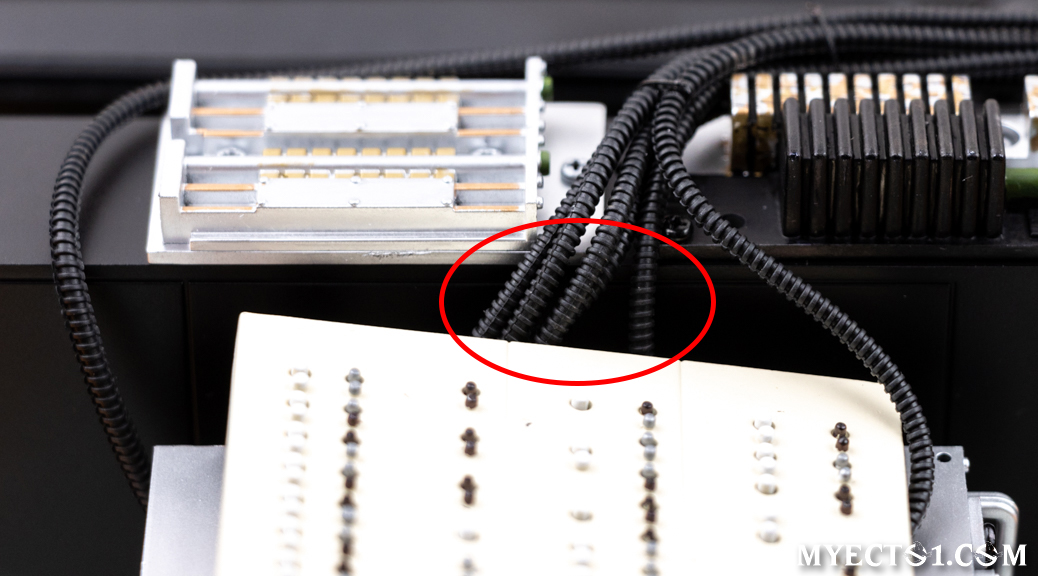 Finally, these Flex Tubes can all be plugged into the new holes we made in the back of the BGM-340: On my build, one tube was a bit short so it would not reach the holes. It is hiding in the bundle of tubes and it not easily seen: 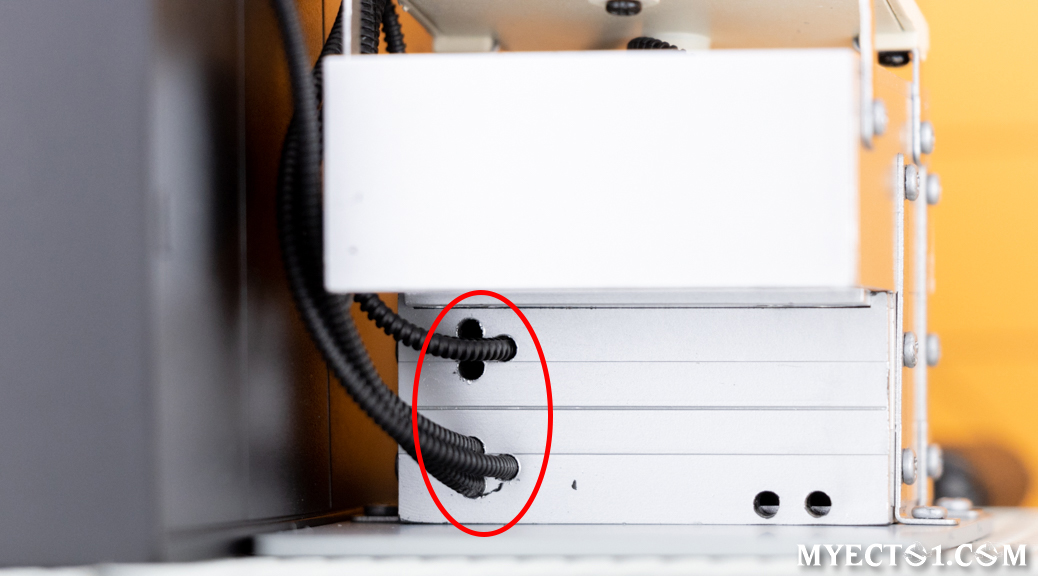 Besides, the space behind the BGM-340 on the real car is a total rat’s nest so this way is actually cleaner!

After all is said and done completing Issue 15, I feel this entire rear workstation turned out fantastic! 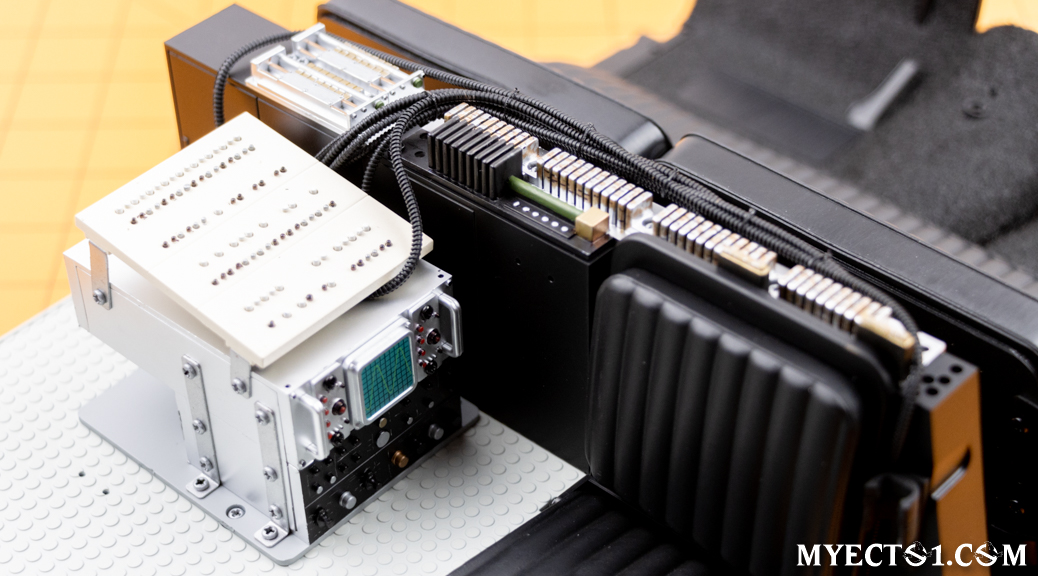 Modding this BGM-340 was a lot of fun! I had no expectations and no plan, I just kind of winged it and I was happily surprised. I wonder how many more mods we are going to have to do. Time will tell.