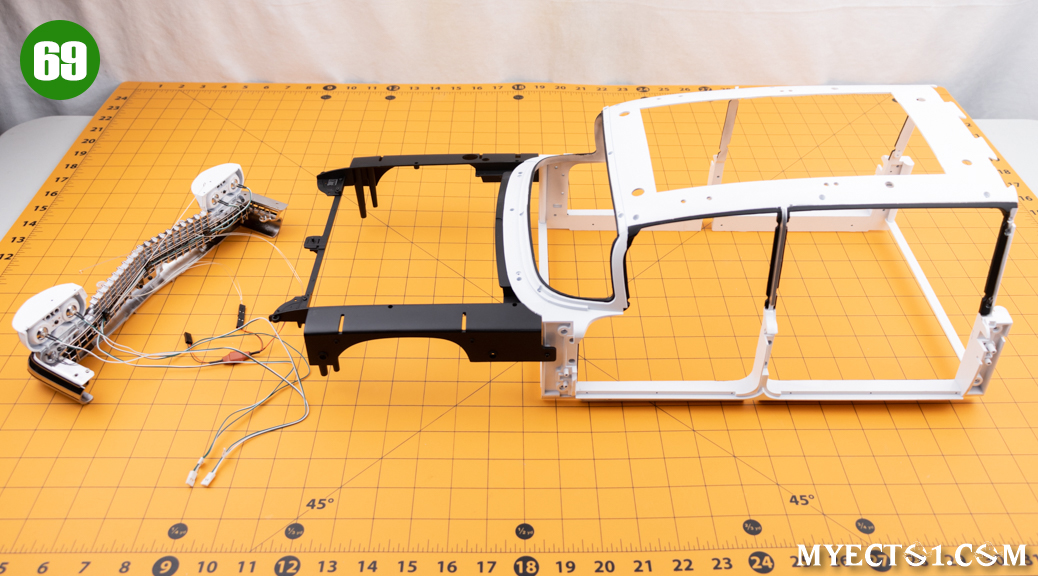 “In this stage, you fit the headlight LEDs into the headlight reflectors as well as combining the front and middle parts of the body frame.” Materials: While the Wire Covers are plastic, the Steel Wires and Body Middle Frame are metal.

Before working on this frame, remove the two white metal strips from the Body Middle Frame.

These metal strips are designed to support the frame during shipping. However, I am going to leave them in place until I have to remove them. This Body assembly will be handled a lot over the following stages, so keeping these strips installed ensures I don’t accidently bend it out of shape.

If you would like remove them now, the strips (and the white screws) can be removed and discarded. They will not be needed again.

One metal strip is under the front of the Body Middle Frame: The other metal strip is under the rear of the Body Middle Frame: On my model, I needed to sand some of the white paint off the driver side post of the Body Middle Frame to get these parts to seat properly. Once fully seated, the top surfaces of Body Front Frame should be flush with the Body Middle Frame on both sides, as seen here: Secure the Body Front Frame to the Body Middle Frame from below with three (3) LM screws. On the right side of our Ecto-1, secure the Body Front Frame to the Body Middle Frame with one (1) LM screw: In the same way, on the opposite side, secure the Body Front Frame to the Body Middle Frame with one (1) LM screw.

These steps should have firmly secured the two Body Frames together: You may notice the test Strobes Mod is still in place, so it will appear in the following pictures: On the back of the Front Bumper assembly, remove these three (3) AP screws. This will release the Front Grille Strip (that the front strobes are mounted on): NOTE: The color of the Headlight LEDs supplied by Eaglemoss is ‘cool white’ and they are going to look like HIDs when lit up. If you plan on changing the LEDs to a warmer white (like the original Ecto-1), now would be the time to do so. I have not decided which way I am going to go with these just yet: Cut the three Wire Covers from their sprue.

I recommend using sprue cutters or a sharp hobby knife here. Also, note that all three Wire Covers are different – two are marked with ‘L’ and ‘R’: NOTE: These PP screws will permanently replace the AP screws we removed earlier.

I tried doing this step per the instructions, but I did not like how the white/green wires were so visible from the front of the grille. Instead, I found that we can flip this Wire Cover A around 180° so the wires can be better hidden behind the Front Grille Strip, like this: Pass a PP screw through the loop at the end of one of the Steel Wires.

I don’t know if it matters or not yet, but according to the instructions, the Steel Wire should come out above the screw, as shown: Using this PP screw assembly, continue to secure the Right Headlight LED wires to the back right of the Front Grille, fitting them under the left Wire Cover C (marked ‘R’).

Since I am trying to hide these wires better, I used the Wire Cover B (marked ‘L’) instead here and flipped it 180°, as shown: Pass another PP screw through the loop at the end of one of the Steel Wires.

According to the instructions, on this side, the Steel Wire should come out below the screw, as shown: Using this PP screw assembly, continue to secure the Right Headlight LED wires to the back left of the Front Grille, fitting them under the Wire Cover B (marked ‘L’).

Since I am trying to hide these wires better, I used the Wire Cover C (marked ‘R’) instead here and flipped it 180°, as shown: With these screws in place, the Front Grille Strip should be securely attached again. I took a moment here to clean up the wiring and match the Steel Wire orientations as per the instructions – they are supposed to aim up and cross over each other, like this: Press the LED on the very end of this cable into the opening on the rear of the inner Left Headlight. Then, press the ‘shorter wire’ LED into the back of the outer Left Headlight, as shown: That was a fantastic issue with lots to do. It doesn’t hurt that we almost have the entire Body Frame assembled too! I did make a slight modification to the assembly steps to hide the headlight wiring better, but it was nothing drastic and it turned out great.