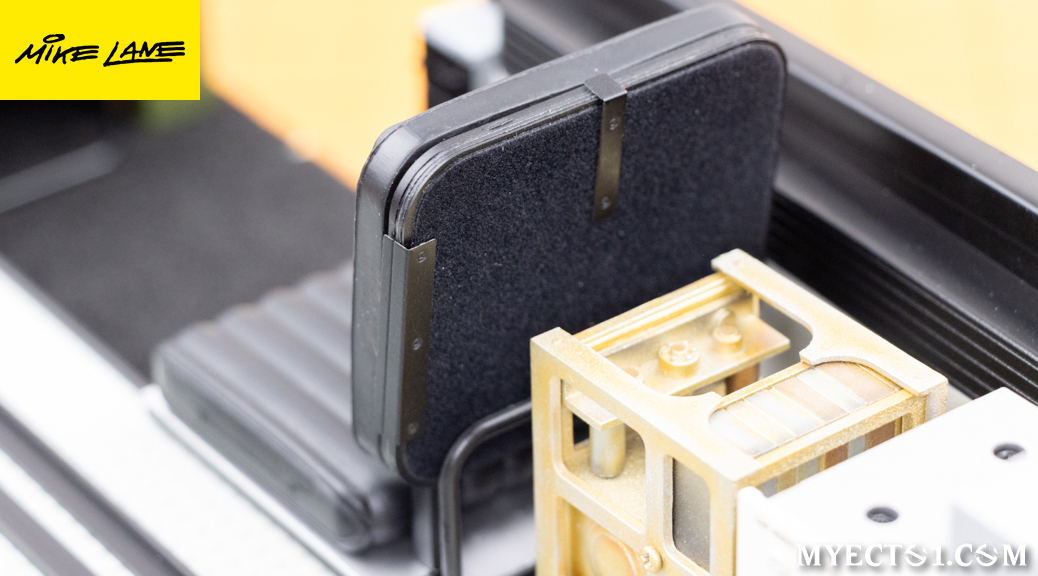 About six months ago, I added the Front Seatback Covers from Mike Lane to my Eaglemoss 1:8 scale Ghostbusters Ecto-1. Recently, Mike has released his Rear Seatback Cover with Metal Trims to cover the screws and improve the look of the rear jump seat. NOTE: This mod fits the back of the rear jump seat that is installed in Stage 57. Since I received this mod after I had reached Stage 74, these instructions and the photos below will reflect that point in the build. Here is my existing rear jump seat: In Mike’s official instructions, he recommends removing the rear jump seat and painting the Jump Seat Base (56A) with Tamiya Primer and then Tamiya TS-6 Matte Black Spray Paint. While this is accurate to the real car, my rear jump seat was already installed. Since I did not want to remove the interior again to get it out, I chose not to do this and left my base alone. However, this choice is yours to make.

Remove the plastic tab on the left side of the Jump Seat Seatback Frame (57A).

I did not want to remove my rear jump seat, so I used my sprue cutters to snip off this left side tab with the seat in place: This actually worked really well. Not to worry, the remnants of the tab will be covered up soon: Remove the backing paper from the Rear Seatback Cover, exposing the adhesive: Fit the Rear Seatback Cover over the four raised screws on the back of the rear jump seat (taking care not to damage the metal trims) and press it into place. And, that’s it! This mod would have been easier to install if I had done it with the seat back in Stages 56 and 57, but it was not difficult at all to add it later on. I think it looks wonderful and hides more screws, which is always a good thing! Check out the Rear Seatback Cover with Metal Trims at Mike’s online store.